Histories of Indigenous Slavery:
A Roundtable Hosted by the Myaamia Center at Miami University
by Cameron Shriver 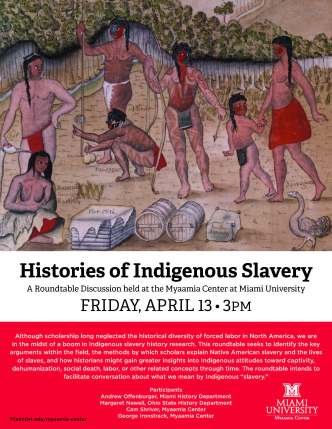 Myaamia people and their younger siblings, the Peewaalia ‘Peoria,’ have featured in historians’ research about Indian slavery in the colonial period, ca. 1500-1800. However, our tribal community and researchers have not been deeply involved, until recently, in discussions or research related to Indian slavery.

Dr. Offenburger explored the question of why historians seem eager to categorize servitude, unfreedom, or captive-taking practices as “slavery.” In his own research on Yaquis and the Mexican state of Sonora, Offenburger talked about a theme Myaamiaki will know well: the dispossession of Native (in this case, Yaqui) land. But U.S. corporations and entrepreneurs also appropriated Yaqui labor in their agricultural plantations, growing crops through irrigation agriculture in Sonora, and through henequen plantation systems with Yaqui labor in Yucatan. Offenburger notes that Yaquis experienced forced labor, although other features we commonly associate with slavery, including the sale of bodies, did not occur in this time and place.

To be clear, none of the participants equated this kind of slavery with the common image in our popular imaginations. Most Americans believe that slavery was a race-based and hereditary system particular to Southern plantations and synonymous with African-American chattel slaves. This was only one kind of slavery; historians view “slavery” as part of a broad spectrum of freedom and unfreedom. In our popular history, we often think of past Native American societies as egalitarian and lacking the kind of coercive power and class distinctions common in other regions of the world, but a closer examination of the Myaamia past pulls this stereotype apart. Looking more closely at the evidence of the lives of unfree people within Myaamia society helps us better understand the complexity of our ancestors’ experiences and the lives of those forced to live within Myaamia communities.

Indian slavery forces us to consider the disadvantaged and deprived in Native America, while recognizing new shades of difference in the broader story of slavery, which too often is painted in black and white.

Cam Shriver and George Ironstrack discussed the contours of slavery for Myaamia people in the 17th and early 19th centuries. We know, for example, that Myaamiaki ‘Miamis’ and Peewaaliaki ‘Peorias’ captured atahkiamowaahi ‘their enemies’ or traded for peehkiciki ‘foreigners’–Pawnees, Wichitas, Chickasaws, and Arikaras, to name a few–and incorporated them into their communities. But what did these unfree people do, and were they made full members of Myaamia villages, should we call them slaves, or were they some other category of person?

One way to think about this thorny issue is to turn to the Miami-Illinois language at the time. What were the words that French missionaries translated as “slaves”? Their Myaamia and Peewaalia informants, speakers of the Miami-Illinois language, provided an array of terms. One of them was the noun nintaya, which the Jesuit fathers translated as “my dog” or “my slave.” 17th century Miami speakers might also have used kiikiona, a word the Jesuits sometimes translated to “prisoner” or “slave.” In fact, the French dictionaries provide terms focused on the stages of capturing, adopting, torturing, trading, and disciplining people that French speakers called esclave ‘slave.’ To Myaamia researchers it is significant to note that the French chose to use one term to describe individuals where Myaamia people use a more diverse set of terminology.

Historical stories are another type of evidence that could help us. Miami and Peoria citizens might know the story of Kaapia, recounted by Gabriel Godfroy in the late 1800s. In the story, Gabriel recounts the capture, torture, and execution of Ayaapia ‘Buck’–a “real Kickapoo warrior.” In the 1600s, the Jesuit dictionaries identify those who the Myaamia and Peewaalia captured and killed as “slaves.” Ironstrack asked, given what we see in this story, did Myaamia people at the time see Ayaapia ‘Buck’ as a slave? Would they have called him atayawaali ‘their slave/domestic animal?’ Gabriel did not use this term to refer to Ayaapia. Additionally, Ironstrack asked that we consider how Ayaapia perceived himself. After his capture, did Ayaapia see himself as a slave?

The array of phrases around captive-taking, burning, and domestication give context to Aayaapia’s situation. The Myaamia men captured Ayaapia ‘Buck,’ and an old man beat him with a club. But Ayaapia would not allow them to drag him to their village and insisted that they kill him on the spot. Was he kiikiona ‘a captive’? Was he meeloonihinta ‘one who is tortured?’ Was he, or was he intended to be, atayima ‘a domesticated animal or slave?’ According to Gabriel Godfroy’s narration, the end of Ayaapia’s life was shaped by his resistance and his refusal to be domesticated. Aacimwitaawi:

They tied him to a stake. They started a fire.
“Give me a pipe,” he said. They gave him
one. He smoked the pipe as he was burned. He
smoked as long as he was still breathing.
Then the pipe fell from his mouth.

Myaamiaki ‘Miamis’ and Peewaaliaki ‘Peorias’ remember Ayaapia today, but not as a slave. So where does he fit on the “slavery” spectrum?

What emerged from the roundtable was not only the question were these people slaves?, because such a general category does not clarify their position in Myaamia societies in the past. Rather–whether we call them slaves or something else–what did these unfree people do, and how did Myaamia people think about them?