Mihšiiwia Kiilhswa (Elk Moon) is named for the Eastern American Elk (Cervus canadensis canadensis).  The Eastern Elk subspecies was hunted out in the state of Indiana by the 1840s and declared extinct in North America in 1880. 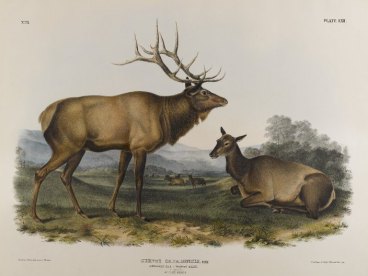 To the best of our knowledge, this month is associated with the fact that the Eastern Elk used to mate around this time of this year (August & September).  During mating season, the woodlands around the Wabash River would fill with the sounds of male Elk bugling, which is used to call out to females and warn off competing males (click here to listen to an Elk bugle).  The Eastern Elk’s close cousin, the Roosevelt or Western Elk, has been introduced to the woodlands east of the Mississippi, and so it is possible that in a few generations we may once again hear the bugling of Elk along the Wabash.