šaašaakayolia kiilhswa (Grass Burning Moon) is named for the specific way fires burn during this time of the year. As niipinwi (summer) ends and we move through teekwaaki (fall) the transition to winter begins.  It’s during this time that the forest understory and prairie grasses start to dry out. Generations ago, Myaamia people intentionally lit fires during this time of year. Fire cleared out the brush and brambles in the forests and helped maintain healthy grasses on the prairies. One benefit of these intentional fires was to create habitats that were favorable to big game, like moohswa (white-tailed deer), miihšiwia (elk), and lenaswa (bison).[1] During this month, there is still enough moisture retained in the plant material that fires are of low intensity. These fires mostly smolder and burn in streaky patches. 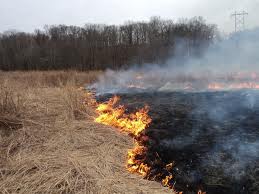 Fire was a commonly used tool across North America by indigenous groups and was one of the major ways that humans shaped their environment prior to contact with Europeans. Fire created environments that felt like parks to the first European settlers, but they failed to realize that these environments were, at least in part, created through human management. As settlement progressed and the use of fire declined, the understory began to choke out the open spaces in the forests and the dead wood began to accumulate on the forest floor. Many forest management experts believe that the big fires we currently see in the west are the product of over 100 years of human neglect. Once indigenous fire was removed from the ecosystem it disrupted a delicate balance that had existed for 1000s of years.